Project DIVE (Drilling the Ivrea-Verbano zonE) is a multidisciplinary international collaboration to probe the continental lower crust and its transition to the mantle through scientific drilling in the Ivrea-Verbano zone (IVZ), Italian Alps. The project is run under the financial and operational support of the International Continental Scientific Drilling Program (ICDP).

The IVZ is one of the most complete and best studied archetypes of a continental crust–upper mantle section on Earth. Recent evidence illustrates that the IVZ is an exceptional archive of trans-crustal continental magmatism documenting lower crustal processes of magma emplacement, crystallisation and crustal assimilation, and of the development of near-surface magmatism, including evidence for protracted super-eruptions during the Permian period. A defining feature of the IVZ is that the available geophysical evidence points to the surficial (indeed as shallow as 1-3 km depth) presence of mantle-type high-velocity, high-density rocks. This structure is referred to as the Ivrea Geophysical Body (IGB), which gained worldwide notoriety more than 50 years ago. As such, the IVZ provides a truly unique natural laboratory to fundamentally advance our understanding of the continental lower crust and the crust–mantle transition zone by a combination of geoscientific approaches and scientific drilling, complementing offshore attempts to drill through the Moho.

Scientific Drilling in the Ivrea-Verbano ZonE, the worldwide known natural laboratory to address the above questions, will literally DIVE to the targeted depths to unravel the:

Phase 1: Drilling two 1-km deep holes in Megolo (DT-1a) and Ornavasso (DT-1b) in Val d’Ossola, representing the pre-Permian metasedimentary sequence of both mafic and felsic lower crust of the IVZ.

Phase 2: Drilling a 4-km deep hole in Balmuccia (DT-2) in Val Sesia, representing the roots of the Permian trans-crustal igneous system of the IVZ, including potentially the Moho transition zone. 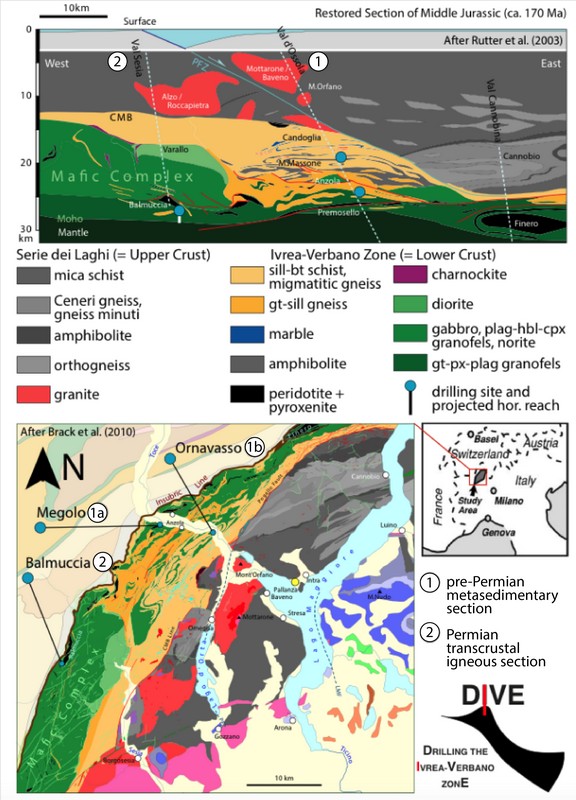 Figure caption: Present-day geology of the IVZ (after Brack et al. 2010, and references therein) with location and corresponding depth of the proposed drilling sites of Megolo, and Ornavasso (Val d’Ossola) of Phase 1, and Balmuccia (Val Sesia) of Phase 2.